This informative 130 page paperback book by Harry George Spirides is a part of the Images of America series. It explores Hotel Tybee’s history and touches on the past of Tybee Island. It also includes fascinating historical photographs. Tybee Island was mostly an undeveloped island outside of Savannah in the 1880s when business man Daniel Purse purchased most of the island with the intention of transforming it into a seaside resort destination.  There were no roads to Tybee at the time. To overcome the obstacle of a two hour boat ride from Savannah, Daniel Purse built a railroad connecting Tybee to Savannah. Thousands of new visitors began flocking to Tybee’s scenic beaches, though the majority couldn’t stay due to inadequate lodging. In 1889, Savannah National Bank president and future mayor of Savannah Herman Myers and investors built Hotel Tybee, which was one of the finest hotels in the country. For over seventy years, Hotel Tybee hosted vacations, conventions, social events, and gambling. Hotel Tybee was ravaged by a fire in 1909 but was reconstructed more marvelous than before. It witnessed hurricanes, war, a riot, murder, Prohibition, and the Great Depression 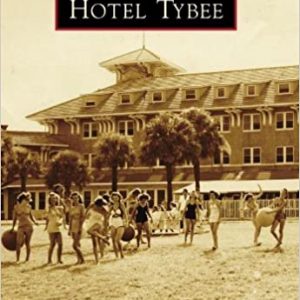 You're viewing: Hotel Tybee $21.99
Add to cart
Add to wishlist